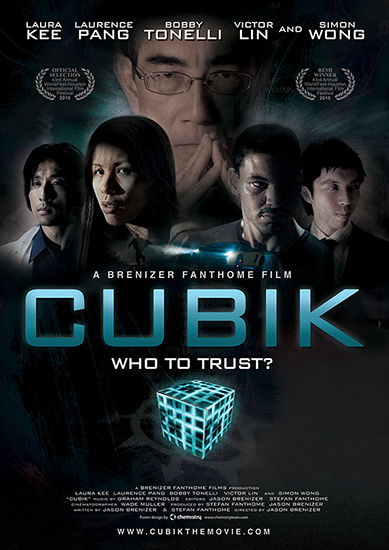 A trailer for the 32-minute award winning film that sparked THE CUBIK CONSPIRACY book series.

A re-imagining of the Singapore underworld which follows the exploits of a young woman torn between living up to her familial expectations and finding her own passions in life.

Singapore is notoriously strict. If you are found with a firearm, you’ll see serious prison time. Fire that weapon, it’s even worse. Stefan and Jason wondered how the technology of protection would be distorted under the pressures of such an efficiently run society.

We teamed up with members of LucasFilm and ILM to transform our independent film into a feast for the eyes.

On the flip side, we engaged cast and crew from Singapore, Malaysia, Thailand, Australia, India, the USA, and the Philippines to give the story a true flavor of Southeast Asia.

@barryeisler Best Corpse Reviver #2 I’ve ever had was at Péché, 4th St, Austin, TX. If ever in town (after COVID-19), you must stop in.

Thanks @SamHarrisOrg @joerogan for introducing us to Andrew Yang! The #YangGang has a $1.5M fundraising goal by Sept 30. Mentions from you this week would help smash that goal! We need Andrew’s voice through the primaries to keep policies and debate topics aligned w reality

@SamHarrisOrg Waking Up- The Social Self- you talk about making a choice to let go of negative states of mind or emotion, don’t act on them. For me this rubs against your notion that free will is an illusion. Can I truly choose the act of not ascribing meaning to the emotion?

I think Trump should be the face of a new American greenback: the $3 bill! #trump #dollar #crypto #fakenews #money #crash #inflation

@johnaugust @clmazin @franklinleonard Thanks guys for the thoughtful replies. Hugs and/or handshakes from Austin, TX. Whichever you prefer.